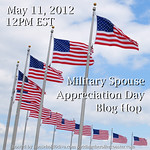 Did you know that the Friday before Mother’s Day is Military Spouse Appreciation day, as proclaimed by President Ronald Reagan in 1984?  Well, now you do!  🙂  In honor of this holiday, Ann Marie at Hello, I’m Erin and I’m an Air Force wife!  That statement still feels new to me – my husband (DH) recently switched branches from the Army Reserve to the Air Force Reserve.

When I met DH, he was a civilian, having previously served in the Marine Corps as a young man.  He had been out a while and wanted to get back into the military.  I’ve been with him every step of the way through his journey into (and out of) the Army.  We were married on the day of his graduation from basic training, but separated for many years after that as he left for technical training, an unaccompanied tour in Korea, his new duty station in North Carolina (Fort Bragg), and then Afghanistan.  Our relationship has been characterized by the separation so typical of military marriages, but I wouldn’t have it any other way.

I made the sacrifice to stay behind all of those years because I was completing my Master’s Degree in Special Education and wrapping up three years of teaching, which allowed me to easily acquire new teaching licenses in other states as the military moved us around [currently licensed in California, North Carolina, and Colorado].  I’ve been teaching special education math for six years, and I’ve been in the field for eight years.  There’s never a dull moment when you’re teaching high school, let me tell you!  I love what I do and I love the relationships that I build with my students.

DH decided to leave the Army and join the Reserves.  We made the decision to come to Colorado, where he would enlist in the Air Force Reserve.  He threw me for a loop when he got sweet talked into the Army Reserve.  Flexibility is a must in the military!  He put about a year and a half in the Army Reserve before he was successfully able to switch over to the Air Force Reserve two months ago.

As you can see above, I am a military spouse and a military service member myself!  After moving out to Colorado, I made the decision to enlist in the Air Force Reserve – one of the best decisions I’ve ever made.  I’m proud to serve my country alongside my husband.

This brings me to my blog, Aim High Erin.  While I started as a milspouse blogger rambling about whatever came to mind, 2012 brought a change to my blog as I began focusing on my experience at BMT and sharing my stories with others.  The amount of people I’ve reached as a result of this evolution has been remarkable.  I’m thankful for the opportunity to help educate others about the enlistment and training process and sharing my love of the Air Force.

I’m a 31 year old Navy sister, Army wife - Air Force wife to a prior service Marine/Soldier, and an Air Force Reservist. I am a happy wife and mother. My husband switched branches and joined me in the Air Force Reserve. We look forward to a future of dual military service!